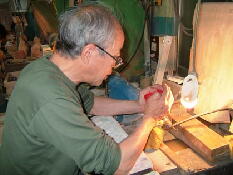 Over 150 Years of History

The "Edo Kiriko" has started its history in the end of Edo(Tokugawa) Era. That is a traditional technique of cutting glass which is never seen in any other countries in the world.

Since then, its technique has been succeeded over 150 years through Meiji, Taisho, Showa, Heise up to Reiwa Era.

"Edo Kiriko" was firstly developed in 1834, by "Hyobei Kagaya", the master of glass transformer store, who has tried to engrave on a surface of glass with "Kongo" sand.

The present style of "Edo Kiriko" has established in Meiji Era, with been introduced the way of European cut glass, and modern equipments.

Also, the name and reputation of "Edo Kiriko" has been popular by 20th of Meiji Era(1888), while lots of excellent works have been produced by craftsmen who were born in Edo Era.

The quality of "Edo Kiriko" has been improved by the research of glass material, and the method of grinding crystal glass in the 1920*s.

In the end of Taisho Era or the early in Showa Era, "Edo Kiriko" has been rapidly developed and diffused, that was the 1st stage of its golden days.

Our mission is to preserve and raise "Edo Kiriko" as high quality, beautiful and Japanese traditional craft work on a long-term basis.

our further favorite usage and understanding would be appreciated.